A proposal of comprehensive changes in FORM GSTR-3B was deliberated by the GST Council in its 47th meeting held at Chandigarh on 28th and 29th June 2022. The Council recommended that the said proposal may be placed in public domain for seeking inputs and suggestions of the stakeholders.

Accordingly, the general public and the trade at large are hereby informed that a detailed Concept Paper on comprehensive changes in FORM GSTR-3B is enclosed.

All members of the trade/stakeholders are requested to kindly furnish their views/comments/suggestions on the Concept Paper latest by 15th September 2022 at [email protected] so as to facilitate completion of the matter.

A comprehensive study has been done in respect of the return required to be filed under section 39 of the CGST Act by considering inter alia various representations and suggestions received over a period of time. Brief history of return filing under GST, amendments made in the Finance Act, 2022 in respect of the provisions related to Returns and elaborate proposal for changes in FORM GSTR-3B are discussed below. The proposed changes ensure that the GSTR1-GSTR2B linkage remains intact and as far as possible, the GSTR-3B should be auto-generated consequent to furnishing details in FORM GSTR-1.

A. Brief history of return filing under GST:

1. The original design of return involved an elaborate process of filing of GSTR-1, 2 & 3 in a sequence which also envisaged inter-linking with back and forth flow of invoices. However GSTR-1-2-3 model were kept in abeyance. Instead, as an interim measure, a summary return in FORM GSTR-3B was introduced, along with the statement of outward supplies in FORM GSTR-1.

2. Subsequently, a new return system was envisaged (ANX-1/ ANX-II and RET-01). Section 43A was also inserted into the CGST Act vide CGST Amendment Act, 2018. However, section 43A was not notified.

3. In the 39th meeting of the GST Council, it was recommended that the transition to the new return system may be made in an incremental manner by:-

Yo. the linking of the input tax credit in FORM GSTR-3B to the details of the supplies reflected in the FORM GSTR-2A;

ii. linking the details of the statement of outward supplies in FORM GSTR-1 to the liability in FORM GSTR-3B.

B. Amendment recommended by the Council in the provisions related to Returns:

Amendments in CGST Act were recommended by the GST Council in its 43rd meeting to align the GST Law with the GSTR-1/ 2B/ 3B return filing system. The salient features of proposed return filing are as below:

Yo. Filing of FORM GSTR-1 to be mandatory before filing of return in FORM GSTR-3B;

ii. Filing of FORM GSTR-1 to be sequential;

IV. Provision of furnishing of details of inward supplies to be removed, instead FORM GSTR-2B (static return) shall be made available to recipients;

v. Restrictions in ITC to extend where details of the Input Tax Credit of such supplies which have not been communicated to the registered persons

Yo. It has been a long pending demand of trade and industry to allow amendment in FORM GSTR-3B. At present, any omission or mistake made while filing a GSTR-3B return, can be rectified in the return to be furnished for the month/tax period during which such omission or mistake are noticed. Such rectifications/ adjustments can be made up to due date of filing return for September of the next year, or the date of filing annual return, whichever is earlier.

iii. There is currently no clarity with respect to reporting of various kind of reversals of ITC in specific rows of FORM GSTR-3B. Ineligible ITC as per section 17(5) has to be reported in Table 4(D). However, while some taxpayers report it in Table 4(D), others just take net ITC (after reducing ineligible credit) in Table 4(A).

IV. Taxpayers face difficulty in reconciling various reversals and subsequent reclaims of ITC. Reversal may be required due to conditions such as goods not received/ non-payment of consideration within 180 days. However, ITC reversed may be reclaimed later. Currently, no specific rows for such reversals and reclaims is provided which makes reconciliation difficult for the taxpayer.

Yo. Auto-population of values ​​from GSTR-1 into GSTR-3B in specific rows: This would establish one-to-one correspondence to a large extent between rows of GSTR-1 & GSTR-3B, thereby providing clarity to the taxpayer and tax officers .

ii. Restricting editing of values ​​auto-populated in GSRTR-3B from GSTR-1: FORM GSTR-3B may be designed such that going forward it may be feasible to put restriction on editing of specific rows in GSTR-3B in line with extant provisions of CGST Act.

a. the ITC reversed which need not be reclaimed in future; and

b. the ITC which is reversed but may be claimed in the future.

IV. Line-wise entry in FORM GSTR-3B will facilitate the process of scrutiny and audit by the tax administration due to availability of better quality of data. This will in turn help in revenue mobilization efforts of tax administration.

Yo. Auto drafted Input Tax Credit statement in FORM GSTR-2B has been made available to the taxpayer wef August 2020 containing all data regarding ITC available based on B2B supplies received from other persons, imports, ISD and RCM supplies

Keeping in view the challenges of taxpayers as detailed above and the journey of return enhancements done till date, it is proposed to make changes in the format of GSTR-3B which would cover the following aspects:

Yo. Auto-population of values ​​from GTSR-1 into GSTR-3B in specific rows: This would establish one-to-one correspondence to a large extent between rows of GSTR-1 & GSTR-3B, thereby providing clarity to the taxpayer and tax officers . Further, it would minimize requirement of user input in GSTR-3B and ease GSTR-3B filing process.

a. the ITC reversed which need not be reclaimed in future; and

b. the ITC which is reversed but may be claimed in the future.

3. Based on the above mentioned principles, GST Council in its 47th meeting held at Chandigarh on 28th and 29th June 2022 has recommended that proposal for comprehensive changes in FORM GSTR-3B to be placed in public domain for seeking inputs/suggestions from the stakeholders . Accordingly, a draft FORM GSTR-3B return which is enclosed to this note as Annex A and Explanatory instructions relating to the draft return are enclosed as Annex B are placed for seeking inputs/suggestions of the stakeholders. 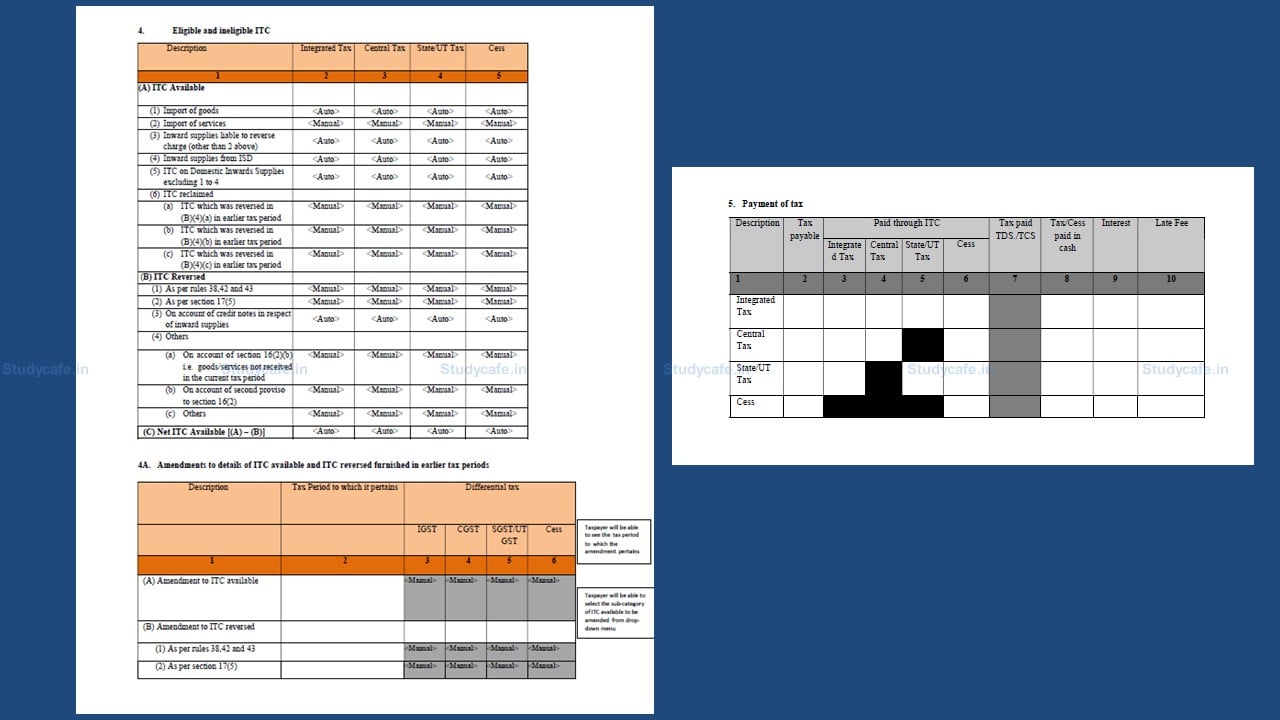