We’re breaking down the legend Nick Faldo’s golf swing, and how it changed over the years.

Welcome to Play Smart, a column to help you play smarter, better golf from Game Improvement Editor Luke Kerr-Dineen (who you can follow on Twitter right here).

Nick Faldo was a rising star in European golf, but he couldn’t shake the feeling that there was something missing. It first became apparent in 1981, when Faldo began competing full time in the US, against the then-dominating players in the world.

Soon, the ruthless British press started asking the same question. They dubbed him Nick “Fold-o,” for his propensity of folding under pressure. It was a harsh assessment, but not necessarily a wrong one.

Tied for the lead with nine holes to play at the 1984 Open Championship, he admitted the pressure got to him and tumbled down to eighth place.

A year later, at St. Andrews, Faldo again was in second through 36 holes, before shooting a third round 76.

That round at the Old Course marked the final straw. Faldo had met swing coach David Leadbetter earlier that year, and in the 1984 offseason, the pair tore his swing down and started from scratch. It took two long years of poor results, and hitting balls until his hands bled. But when he came out the other side, Faldo was one of the best ball strikers in the game, a fearsome player under pressure, and one that ended his career with six majors.

“I didn’t want to just fix my swing,” he wrote. “I wanted to understand my swing.”

Faldo’s crowning achievement came when he returned to St. Andrews six years after his 36-hole collapse. He missed just five greens all tournament – three intentionally. He only hit his ball into one bunker, and he set the scoring record at 18 under. 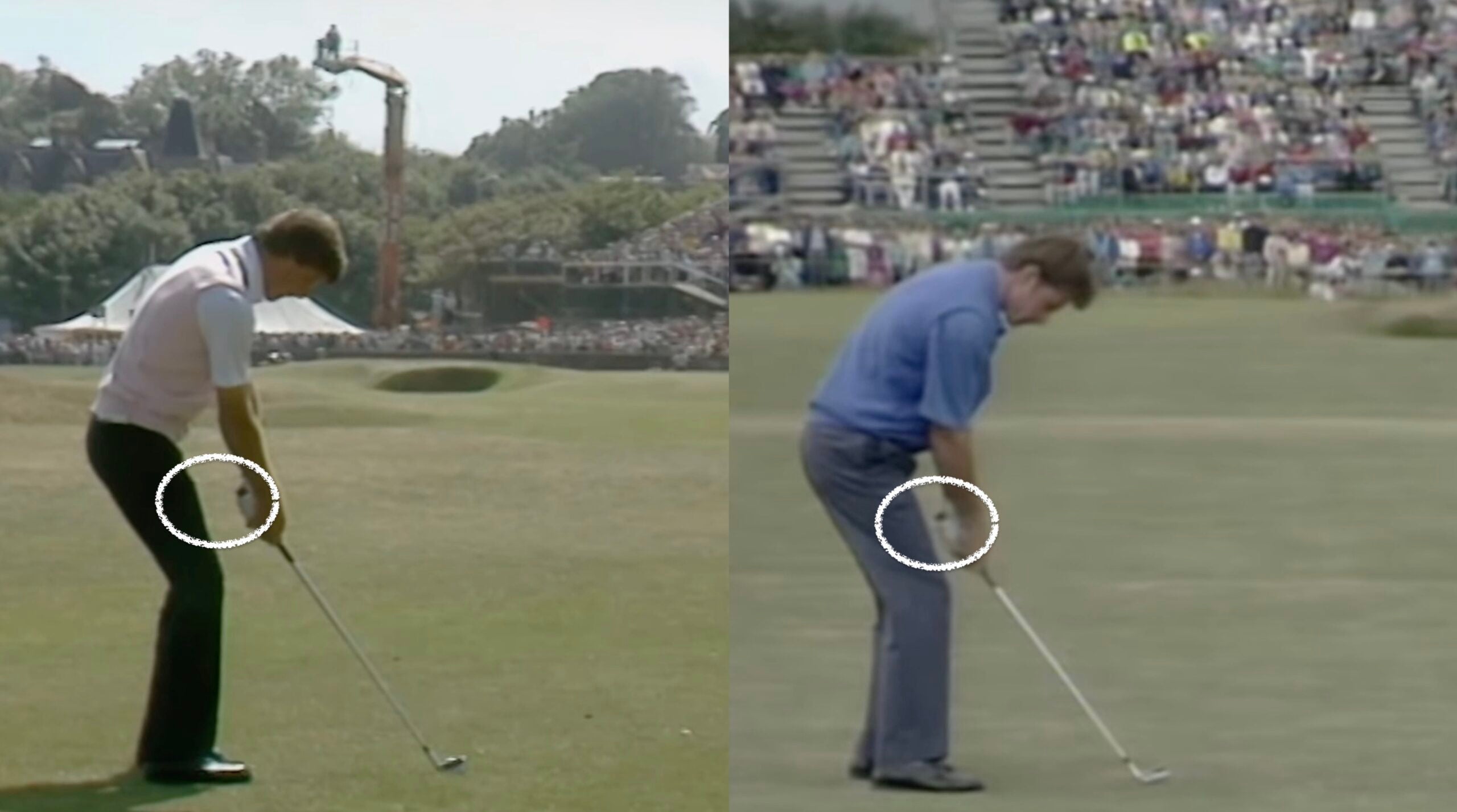 Faldo would work hard on his posture, which he writes would often get “sloppy.” He’s standing slightly too far away from the ball, which would move his weight too far onto his heels, and his chin would drop too far down and occasionally behind the ball. 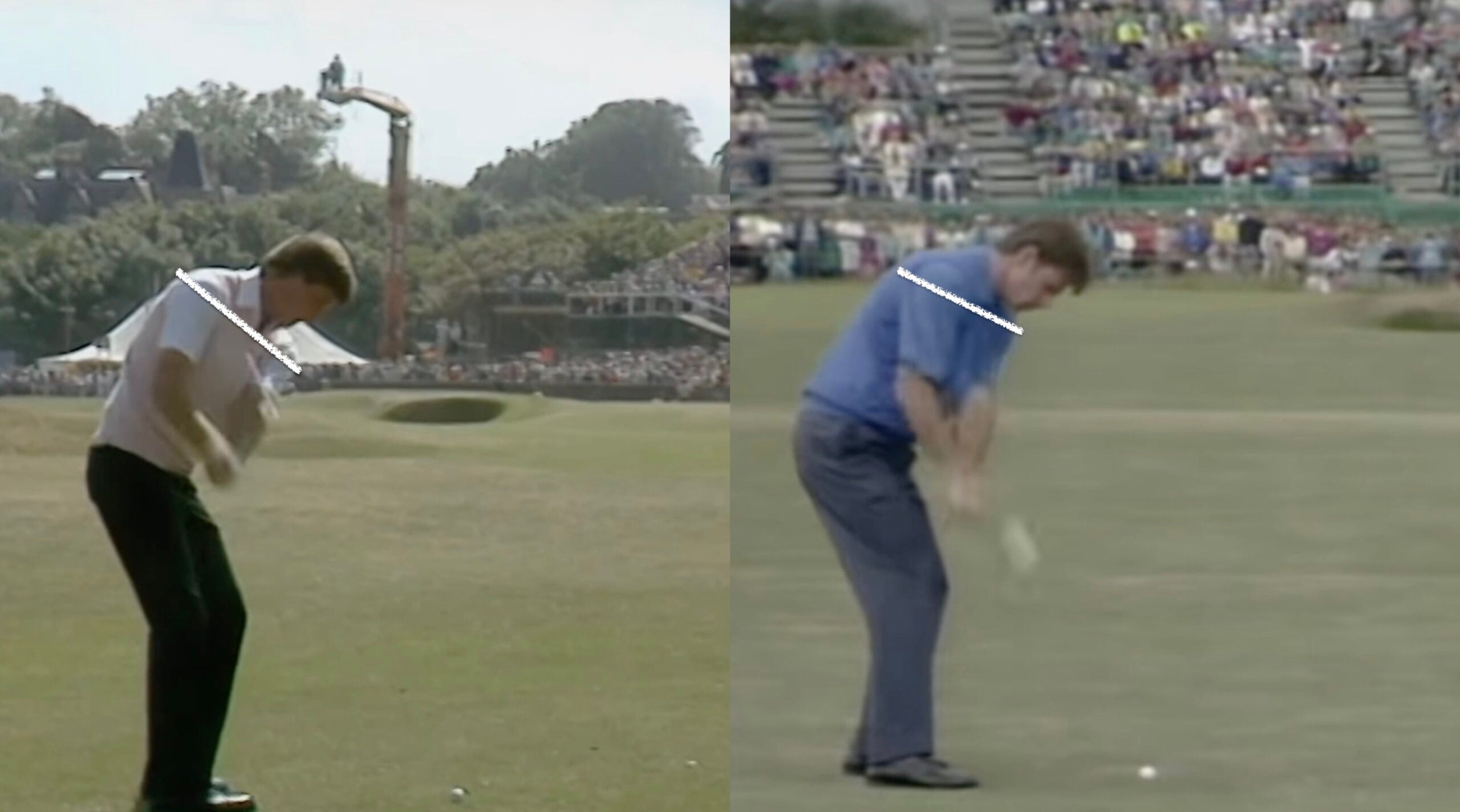 An overriding theme of Faldo’s old swing that it was steeper – or more vertical – than the swing on the right, when he was World No. 1. By this point 1984 Faldo’s right shoulder is higher than 1992 Faldo, the clubhead is more outside his hands, and tracking more vertically.

“My swing was always prone to being fairly upright. I don’t suppose I helped matters by trying to copy the likes of Nicklaus and Miller – players who at the time believed very much in working the club from the ball with a deliberately wide one-piece takeaway,” Faldo writes. “But that was the fashion.” 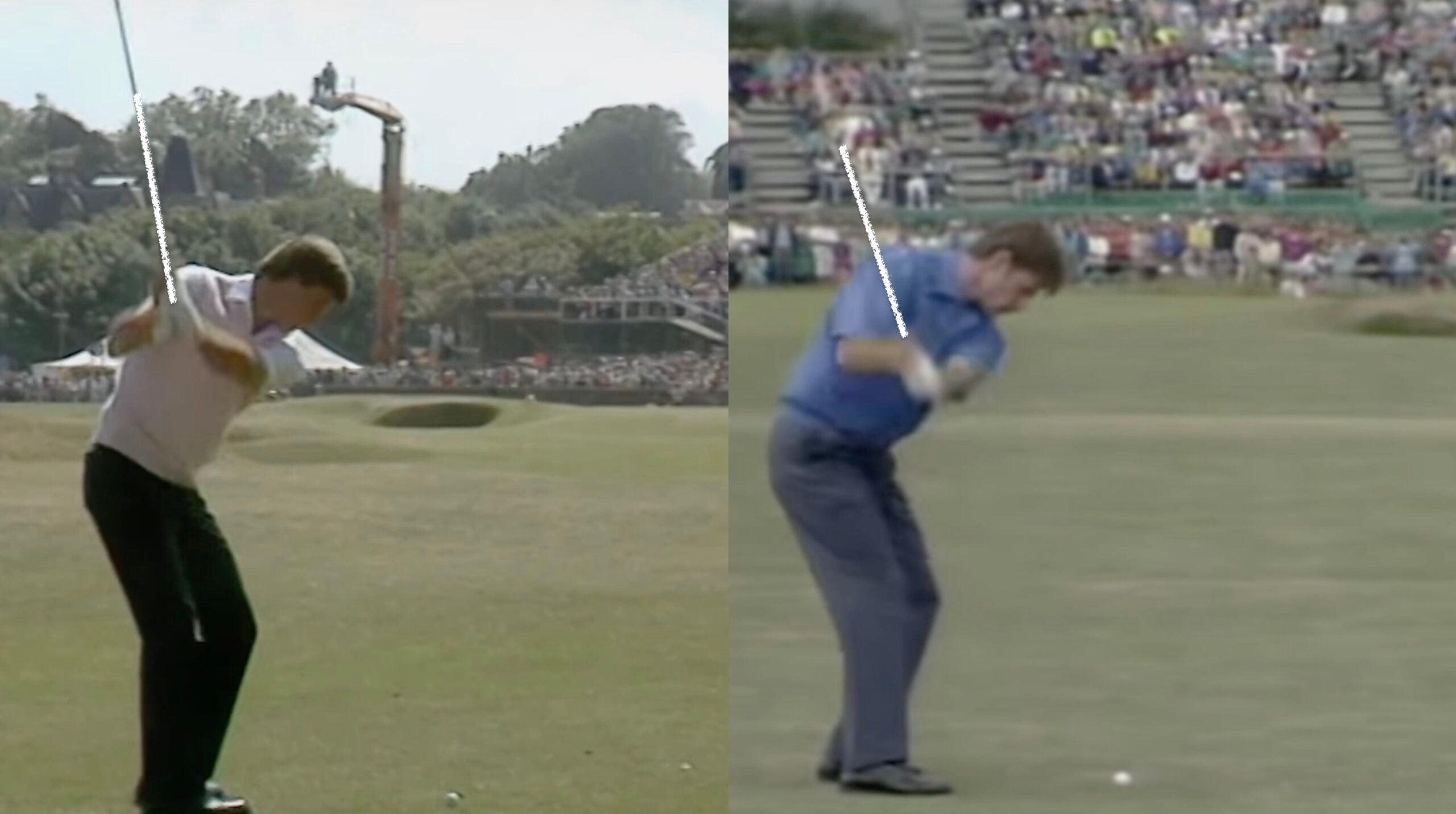 You can see the effects of that swing as the club reaches halfway back. A large part of the reason steeper swings, modeled after the likes of Nicklaus, were so in fashion was because it imparted more backspin on the ball, which made the softer golf balls and persimmon driver heads easier to control. But for Faldo, it caused issues in the elements.

“A steep angle of attack…caused me to hit the ball with a volatile ‘ballooning’ trajectory, and so my game was vulnerable to any kind of wind.” 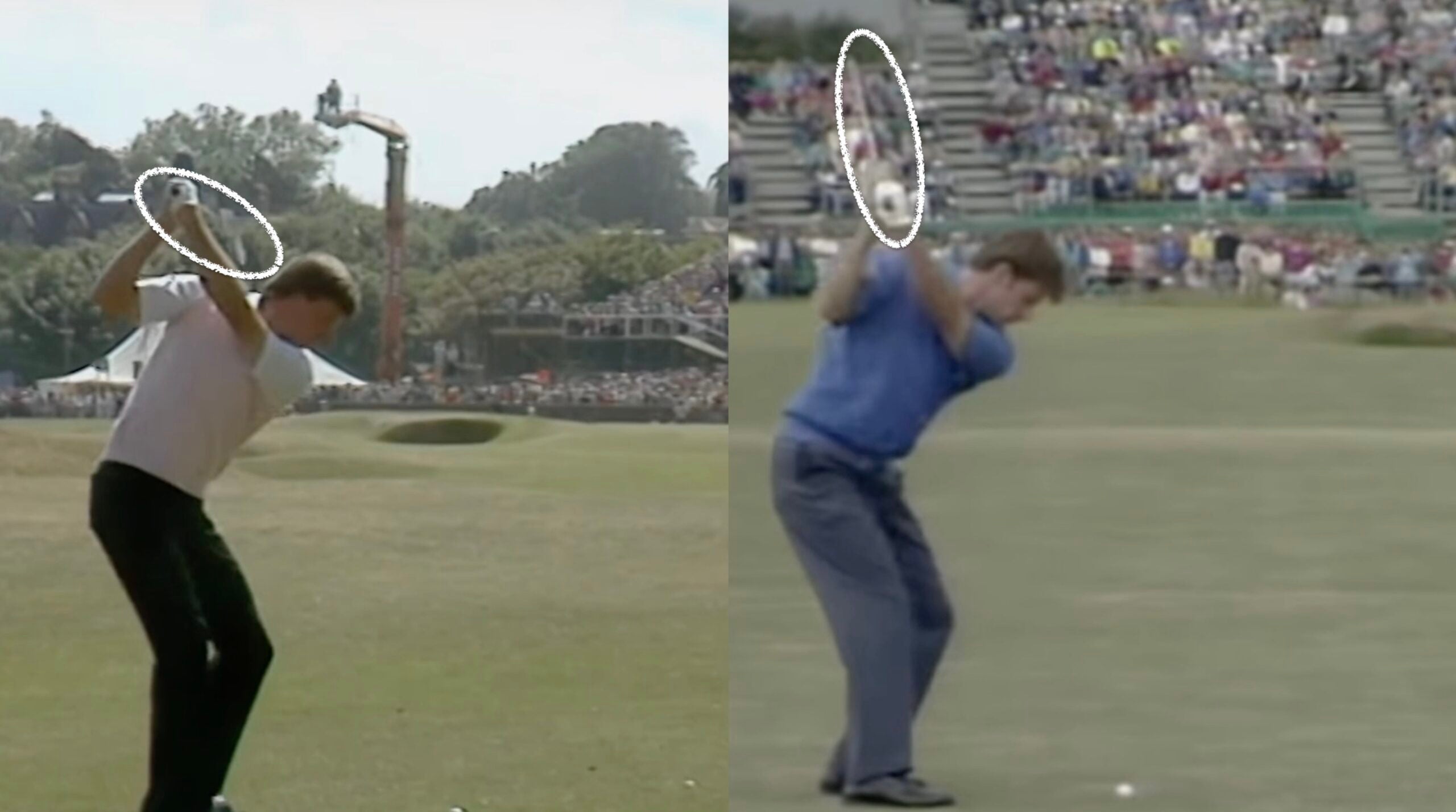 This is perhaps the most apparent difference between Faldo’s two swings.

Faldo has overcorrected from his takeaway and rolled the face “too open,” according to Leadbetter’s file on Faldo shared in the book Fairway Dreams. His elbow is closer to his side in 1992, which Leadbetter writes is the product of him feeling more “stability” in his right shoulder.

His swing got shorter over the years, but thanks to the switch from persimmon to a metal driver, a strength-training routine, and a flatter lower-spin path, he increased his consistency without losing driving distance.

According to PGA Tour stats, his driving distance stayed pretty flat (256 yards in 1984 to 255 yards in 1989) but his driving accuracy jumped from 70 percent to 75 percent, and he dropped his scoring average almost two shots as a result. 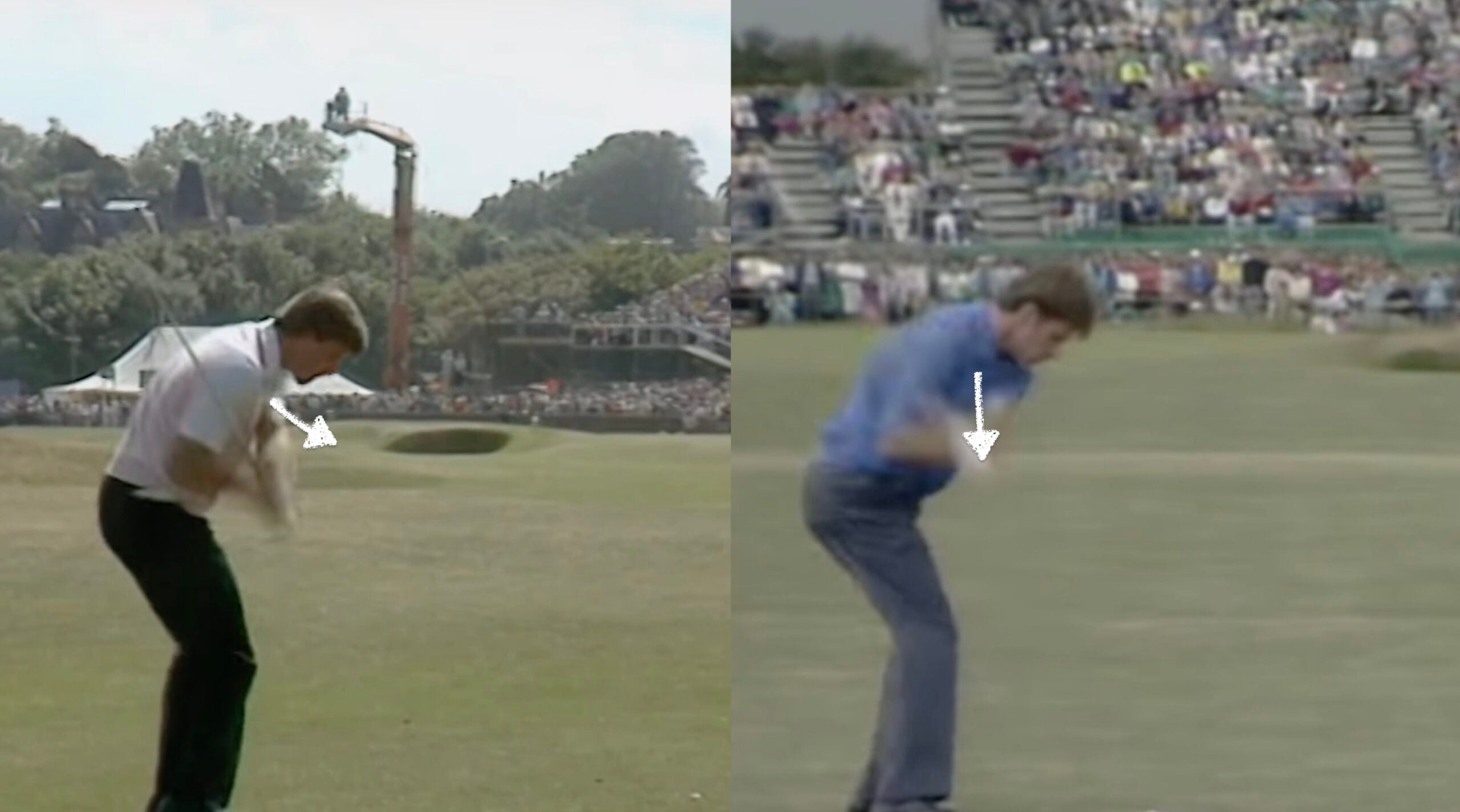 Younger Faldo is sliding his lower body aggressively towards the target, which dragged the club into a steeper position. That’s what caused the spin that was difficult to control, Faldo writes, and created consistency issues.

“I had to practice hard every day just to maintain a consistent level of ball striking,” he writes. 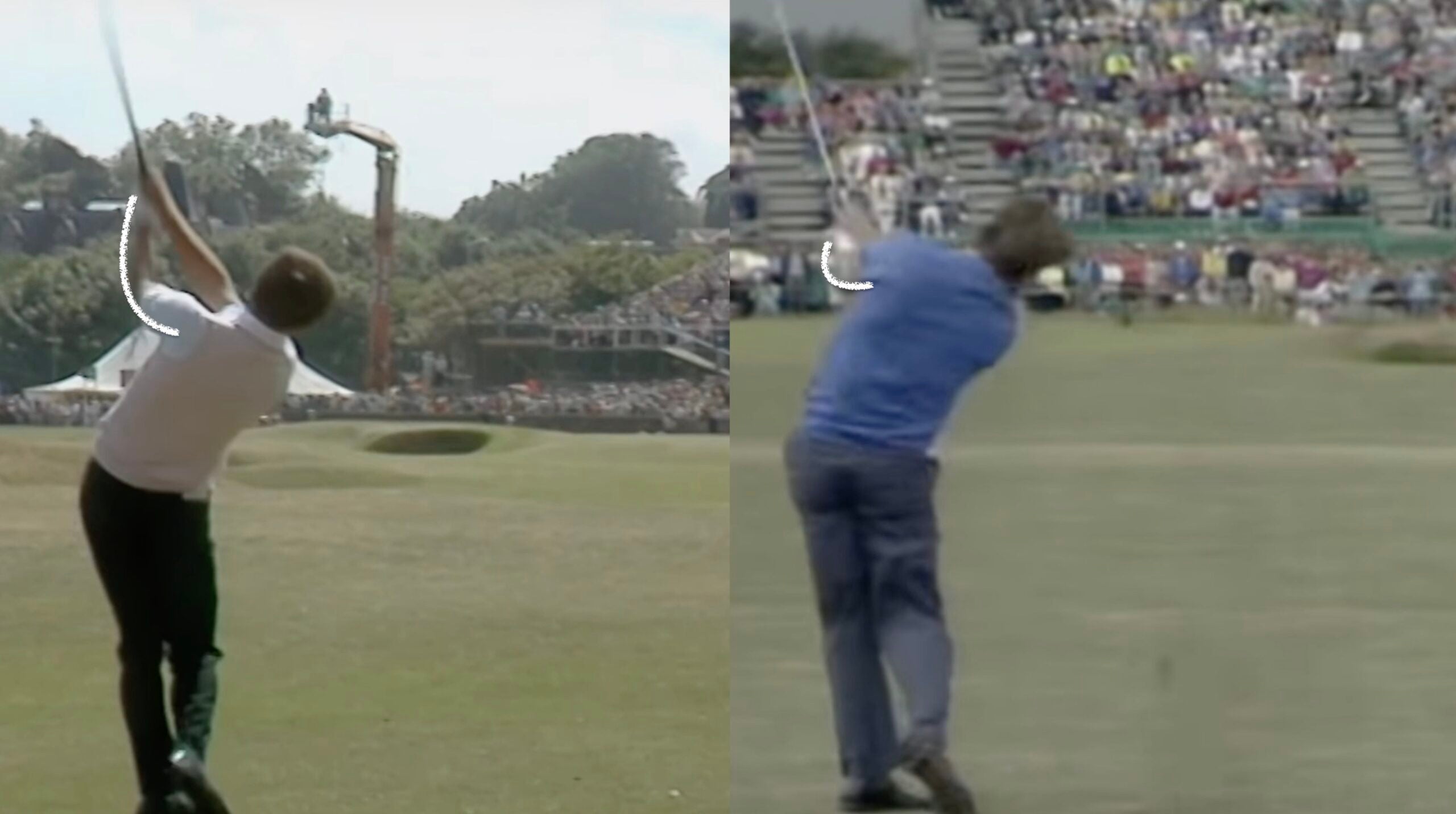 With so much slide towards the target with his lower body, Faldo said his follow through came to resemble an old cliche he was taught: “Reach for the sky and let it fly.”

Having his arms exit lower was the result of the previous work in his swing, Faldo went on to say. The ball came out lower, with less spin, and created a ball flight he could depend on. And, in time, he used it to become the player we remember today.

Luke Kerr-Dineen is the Game Improvement Editor at GOLF Magazine and GOLF.com. In his role he oversees the brand’s game improvement content spanning instruction, equipment, health and fitness, across all of GOLF’s multimedia platforms.

An alumni of the International Junior Golf Academy and the University of South Carolina–Beaufort golf team, where he helped them to No. 1 in the national NAIA rankings, Luke moved to New York in 2012 to pursue his Masters degree in Journalism from Columbia University. His work has also appeared in USA Today, Golf Digest, Newsweek and The Daily Beast.